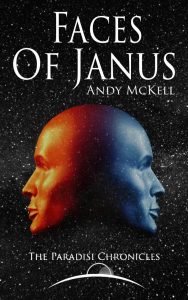 It has been a long journey, but here I stand on the verge of publishing my first novel.

I always wanted to write, but my first High School English teacher convinced me I was barely literate. I think he resented me being taller than him, as a later (taller) teacher promoted me from bottom of the class to (almost) pole position.

It was my final year of school and my small fantasies had been strangled. Hurrah for education!

(Teachers take note : inspirational is good. Try it. Go see Dead Poets Society and try inspirational. If you can’t inspire, go do something you can do.)

After that, life — as it does — got in the way until five years ago, when I retired early. Finally, I cast off the shackles of commercial servitude and let my creative spirit fly free… I would speak to the world through my works!

Of course, it wasn’t that easy. Nothing worth doing is easy.

I started on a space opera scifi novel. I soon realized I had too many ideas for a single book. Only a series of seven could encompass them. Sensibly, I decided that a beginner could not cope with such a project. I trawled the web for guidance and switched to short story writing to learn the craft. I was successful in having a dozen or so published in various anthologies. (See the side panel of book covers, or click here for info.)

Another version of this period in my writing career appears in earlier posts:-

One day, for no apparent reason, The Muse commanded, “Write a paranormal noir novel!” So I did. It’s still in development with a chapter a month being reviewed in my local Writers’ Group. Watch out for “Private Vices” in 2017.

Perhaps The Muse got impatient. One day, that shrieking harridan said, “Discover Paradisi Chronicles!” So I did.

I can’t remember how I found my way into their fold, but it was a good day for me when I did. I described their open-source universe a while ago (see Paradisi Chronicles). It’s been wonderful working with the group, especially Cheri Lasota, whose own novels share characters and locations with mine. Tight collaboration on such a venture is crucial. It’s been fun!

So here I am with a short story in the upcoming Paradisi Chronicles Anthology and a novel straining at the leash to be released.

Less of a beginner, now.

It has been a long journey. And The Muse still calls…