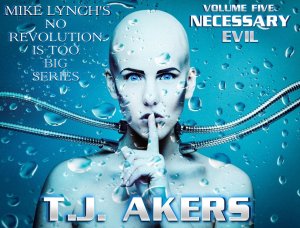 (This series is highly recommended…)

Rescue Brokers are one of the most notorious professions known in the galaxy, and the most benevolent, for the right price. Of them all, Stelfson has set himself apart. He has transformed himself into human and saved a race threatened with extinction, freed an enslaved civilization no bigger than a micron from their overlords, and journeyed to the other side of the universe and stopped a world eater with an appetite that would never be quenched until it had consumed all the known worlds. Sit down and strap yourself in for ten adventures that are sure to grab a hold of you and never let go until the last page.

As civil war spreads across have the Galactic Union, spilling into the frontier worlds, Stelfson is hired to intervene. What is his weapon of choice? Only the most terrifying commodity known to the civilized worlds – an accountant.

2 thoughts on “No Revolution Is Too Big: Vol 5”