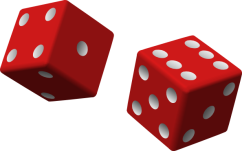 Is Pessimism a valid world view? Let’s throw a little science at this. (Just a very little.)

Hence… it’s infinitely more likely for the string be tangled than not. Note: This applies especially to earphone cables.

We have seen how “Things go wrong” is the “infinitely” more likely outcome. But Optimists persist in holding to their world view. Could there be other factors at play? For example, does “luck” intervene and skew the results? Are Optimists that way because they are usually “lucky” and beat the odds?

Question: Does a lucky person always find a pocketful of untangled earphone cables?

Why do some people seem to be “lucky”? When asked, lucky people usually try to look mystical and superior at the same time – a hard trick to pull off – and say something like, “you make your own luck”. Lucky people always take the credit for their own success.

Unlucky people will blame something else; for example, if they miss a flight, they will blame the floodwater, the car that broke down on the motorway ahead causing a 10-mile tailback… never themselves.

But how valid is this, “you make your own luck”, thing?

(Warning: the following section contains simple statistics and references to flashing lights, but no nuts.)

“You stand more chance of being hit by lightning than winning the Lottery”. Is that a fact? (Using UK figures…)

So you are around 4.5 times more likely to win the UK Lottery with a single ticket, than to be hit by lightning. Sounds more interesting, now?

Let’s look at two average guys, Fred and Joe, who are extremely similar in their health, age and habits. Each buys one Lottery ticket.

We can agree that Fred was quite “lucky”, while Joe was extremely “unlucky”. But who “made his own luck” and exactly how? Joe would love to know.

We can extend this to accidents or mayhem caused by human third parties affecting innocent bystanders… a runaway car misses Fred, but hits Joe (sorry, Joe – burned AND bashed). Again, how did Fred do it?

“You make your own luck” is an invalid claim, being inexplicable in these cases, and statistically unsound. Perhaps Fred could post a “how to get lucky” training blog? Joe would love to have some good reading in his hospital bed.

But the wifi would, no doubt, be down…

Anyone out there feel lucky today? Optimistic about anything important?